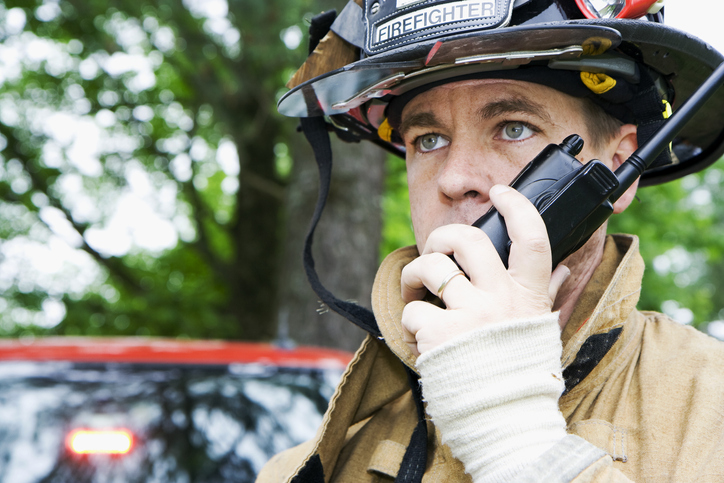 If there was a list of most frequently asked questions people asked about two-way radio, ‘How far can two-way radios reach?’ will always top that list.

There are numerous variables at play here which determine the overall distance.

Knowing the working of a 2-way radio can help you significantly in determining the overall coverage area with a 2-way radio.

How does a 2-way radio work?

Before TVs and internet streaming were a thing, the world used to tune into AM radio for entertainment and news about the world around them. Signals from AM radio fall below 2 MHz frequency. One unique feature about this signal is it can follow the Earth’s curvature, as they are reflected from the atmosphere. As a result, AM radio signals in low-noise surroundings can be received by radios that are present across miles in a different place.

On the other hand, 2-way radio usually falls under the frequency band of 150 to 900 MHz. Contrary to AM waves that can travel across the curvature, these radio signals cannot bend or curve. As a rule, they can travel only in straight lines.

But there are exceptions to this. Even though these signals travel straight and follow a line-of-sight path, they can also travel through non-metallic objects and can penetrate walls or other obstructions. These waves can get reflected or simply bounce off the surfaces, so it is not typically straight paths that they follow to reach their destination.

So since the radio waves travel in a straight path, to figure out the maximum range for such waves, we also have to consider the curvature of the Earth. If you stand on any point on the Earth, the waves that are generated from the radio will travel straight and eventually go into space after crossing the horizon. Thus, the distance till the horizon is the maximum communication range for a two-way radio.

One important component that determines the total distance the radio waves will travel, and you will be able to communicate to a person in that vicinity, is the radio’s power output. This power output is measured in a unit called ‘watt’. A normal FM radio station will broadcast at 50,000 to 100,000 watts. Whereas a hand-held two-way radio broadcasts at 1 to 5 watts. Contrary to this, a vehicle mobile radio emits signals between 5 to 100 watts. As a rule of thumb, the more watts the radio has, the farther it can send its signal.

But why exactly is this the case? Science can help you understand that.

You must have noticed that when water moves through a pipe, it loses its pressure eventually. When electricity flows through a wire, it loses current. The same happens with any physical object that is rolling on the ground because of friction. Radio waves follow this same principle.

You must have also noticed to circumvent this situation, people use more water pressure, current, or speed to travel farther. The same is the case with radio waves. The higher the radio power, the longer the distance it can travel. Increasing the power in watts can help you overcome any impedance to its coverage ability.

There’s a caveat that you should know. The more wattage a portable radio has, the quicker the battery drains out.

Another crucial element that determines the total distance the radio can cover is the type of frequency that it uses.

Majorly, there are two different types of major formats for two-way radios - Ultra High Frequency (UHF) radio and Very High Frequency (VHF) Radio. It is important to note that there is no clear winner between the two.

Commercial radios that use this band have their frequency ranging between 400 to 512 MHz. It wasn’t the most commonly used type of radio frequency, but now this frequency is used across different devices such as two-way radios, GPS, and Bluetooth-enabled devices.

The number of frequencies that are available with UHF is plentiful and as a result, in populated areas, the chances of interference between the signals are less.

One shortfall of UHF is that its range is lesser than VHF. But this feature brings in an advantage of its own - since UHF has a low range, the chances of a distant radio interfering with your signal becomes scarce.

Between VHF and UHF, VHF has better maneuverability. It can traverse through rugged landscapes and trees. In a plain area with no trees or buildings to interrupt, VHF signals can travel twice as much as UHF.

But there is a major problem with VHF. First, it has a limited number of frequencies, and as a result interference with other signals can be a frequent thing.

If you are using a 2-way radio for indoor purposes, UHF is a better option for you. While in the case of outdoors, VHF is the better between the two.

Just remember that an FCC license is required when operating a 2-way radio above 2 Watts of power. This applies to both UHF and VHF frequencies.

We hope you have found the answer to the question - ‘how far can two-way radios reach?’

Now that you know which radio is better for you, it’s now time to buy. Luckily, here’s a great place from where you can buy.